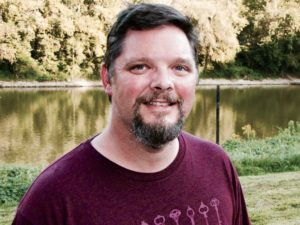 Congratulations to Rus Powell of Madison County, Kentucky! Rus is the first musician selected to record and publish his music with the support of KentuckyJam.org

The cost of making quality recordings and distributing music is an obstacle to many independent musicians. A new nonprofit is trying to change that. KentuckyJam.org has announced that Rus Powell is the first artist selected to self-produce his music with their assistance.

Rus Powell is a guitarist from Madison County, Kentucky. Rus first learned guitar from his father and was influenced early on by the music of Linda Rondstat, Jim Croce, James Taylor and Gordon Lightfoot, among others. After starting formal lessons on both acoustic and electric guitar, Rus entered his school music program playing with the jazz band, concert band and marching band. Rus also has experience beyond the guitar, playing drums, mandolin, upright bass and fretless bass guitar with school bands, bluegrass bands, rock bands and as a church musician. Rus credits his current style to the influences of Michael Hedges, Ed Gerhart and Randy Scruggs. The music for Rus Powell’s upcoming solo album is sophisticated, instrumental acoustic music featuring his tasteful finger-style guitar playing. Rus is constantly striving for his own, unique sound.

Founder and president of KentuckyJam.org Michael R. Cavitt says that Rus Powell is the perfect example of the kind of artist KentuckyJam.org was created to help. “In fact, Rus is the inspiration for the idea that led to creating this charity,” says Cavitt.

KentuckyJam.org is a 501(c)(3) non-profit organization that helps Kentucky area musicians record and self-publish their music. They select Kentucky area musicians, who have at least 25 minutes of original material and, at no cost to the musician, make a professional-quality, digital recording of their music. “Kentucky is full of talented musicians whose music deserves to be shared. Many aren’t, for various reasons, in a position to record and produce their own music. We established KentuckyJam.org as a 501(c)3 nonprofit so that donations to help musicians record and produce their music are tax-deductible. Board members and officers of KentuckyJam.org are volunteers. Our goal is to keep operating costs at a bare minimum so that KentuckyJam.org funds can be used to help as many musicians as possible,” says founder and president Michael R. Cavitt. The recordings are fully produced, and then 100 CDs of the collection are printed. Some of the CDs are submitted to an online retailer who in turn submits the music to further retailers for streaming and download. The musician’s songs are registered with US performing rights organizations that help collect royalties for musicians when their music is played on radio, television, live venues, etc. All accounts are registered in the musician’s name, who then collect any and all profits from sales. KentuckyJam.org operates solely on donations, not on the sales of music.