Rus Powell is the first artist to be supported by KentuckyJam.org. He is, in fact, the inspiration for the creation of our organization. His beautiful, tasteful guitar music is a fine example of the great music coming out of Kentucky from independent musicians that deserve to be heard. 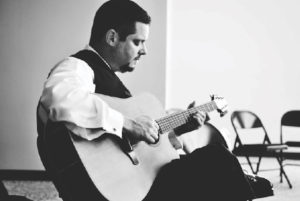 Rus Powell is a guitarist from Madison County, Kentucky. He first learned guitar from his father and was influenced early by the music of Linda Rondstat, Jim Croce, James Taylor, and Gordon Lightfoot, among others. After starting formal lessons on both acoustic and electric guitar, Rus entered his school music program playing with the jazz band, concert band, and marching band.

Rus also has experience beyond the guitar, playing drums, mandolin, upright-bass, and fretless bass guitar. Aside from his solo work, he has performed with bluegrass bands, rock bands, and as a church musician. Rus credits the style of playing on A Thousand Different Roads to the influences of Michael Hedges, Ed Gerhart, and Randy Scruggs.

Rus Powell can be heard live at venues around Central Kentucky. After A Thousand Different Roads, he plans to shift his focus to an electric project. After that, anything goes!

A Thousand Different Roads is widely available on CD and online for download and streaming. Look for it on all major music sources.

Remember, KentuckyJam.org operates solely through donations and volunteers. The artist receives 100% of the profits from the sale of their music. Please support Rus by buying his music!